On our return trip to Budapest from Krakow, having driven through Eastern Slovakia, Erika and I decided to drive through the Western side. Our eventual destination, where we would stay the night, was the capital of Slovakia, Bratislava, located just a stone’s throw from the Austrian border. Our thought was to be close enough to Budapest that we were only a short drive away from our departing train in the early afternoon. 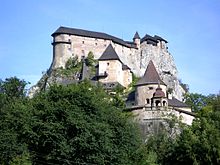 Erika agreed to this decision on one condition – no more castles. The huge number of castles in Slovakia is staggering. Following the link, there are nearly 100 listed on the Wikipedia page. For such a small country, it is castle-dense. But, I acquiesced,  if we were to make it to Bratislava in reasonable time, I had seen my last “hrad” for the time being.

It was tough, I must say. We must have passed 20 signs for various castles on our journey south. Some of them sat on bluffs near the highway. Some were visible at the tops of distant mountains. Some just had small brown signs that piqued my interest.

Alas, I kept my word and we stopped only at one place during our long journey south – a small village in the Slovakian mountains called Čičmany renowned for its practice of painting geometric shapes on its homes. The man at the tourist center spoke no English, so we were unable to find out much about the origins of the practice and Wikipedia wasn’t much help.

Anyway, the photos are below. Click the “Load more” link at the bottom to see more photos.

Reason 888 Why I Love Morocco

Reason 584 Why I Love Morocco

Reason 318 Why I Love Morocco