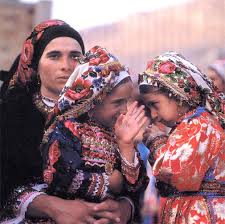 A typical photo offered of Olympos residents in traditional dress.

Olympos is a small village on the Greek island of Karpathos described by some as a “living museum.” One of the evidences for this is often given is that “the women still wear traditional clothing.” Another is “the remoteness of the village has kept its traditions intact.”

Tucked into the mountainside, overlooking the Mediterranean Sea, the setting is stunning.

Enticed by these descriptions, Erika and I had been planning to visit the town for several days. To avoid as much tourism as we could, we waited until mid-week, then drove the long, winding island roads north toward the village. Along the way, we encountered other well-meaning and equally curious couples in cars, many riding rented khaki green quads, and some on scooters.

Remnants of the past, old windmills, used to grind grain, stand on the hillside.

This should have been our first clue. Nothing can stand the pressures of tourism and the more I thought about it, the more it felt like we were going to the zoo to see an exhibit.

Much like how, in quantum physics, the act of observation changes the phenomenon being observed, gawking at people changes their behavior. The observer and the observed become intertwined and inseparable. They are interconnected. I began to have the upsetting realization that I was unwittingly contributing to a diminution of lifestyle simply by my being there.

Yes, some of the women wore traditional clothing, but I got the sense that it was more for the tourists than for tradition. Really, it was just the shop owners. While some small shops offered genuine goods made by local hands, some of them hawked their wares with an enthusiasm and tenacity that rivaled Istanbul’s carpet salesmen.

More realistic, in my mind, were the more modestly, but still traditionally dressed women of the port town,Diafani, sitting on their stoops preparing vegetables for dinner. This town serves as the port for the much higher Olympos. It still has elements of tradition, but the tourism is related to its being a port and not something being observed.

Certainly, the village is beautiful. After all, it’s ancient and nestled into the sides of mountains overlooking the Mediterranean. The vistas are amazing. I could look into them for an eternity. Yet, the whole experience made me uncomfortable.

On the one hand, who am I to long for a past that in many ways has become untenable for modern inhabitants? Who am I to wish for a quaint, unspoiled village where ancient peoples just go about their days seemingly unaware of my presence like animals at a zoo? What if people wandered in front of my house and took pictures of me watching television? What if they blogged about my predilection for french fries, despite my knowing damn well they’re not all that good for me?

I can’t help but wonder if it’s just best to leave things alone and if the village dries up and goes away, perhaps we should let it, instead of always trying to “preserve” history. Isn’t that what happened to so many of the ancient ruins we have seen on our trip thus far?

Turkey and Greece have a much different relationship with their history than we do in North America. History is everywhere in these countries. Remnants of buildings 500 years-old that would have been put behind glass in America are left to fall to ruin in Turkey because there are literally thousands just like it.

On the other hand, perhaps the townspeople give tourists exactly what they want. They give them the illusion that things were a certain way “back in the day” and that someday we can return to that innocent simplicity, even if it’s just for a day. One could argue that tourism is how this village now maintains its livelihood. It’s not like grinding grain with windmills and baking bread in wood ovens is a thriving business model.

I was reminded of a conversation Erika and I had a few weeks ago with some friends in Victoria, BC. Somehow, the conversation turned toward modern media culture, the fading of feminist ideals in the age of Miley Cyrus, and “The Male Gaze.”

Men in almost every culture feel a sense of entitlement when looking at women. It’s considered a birthright to ogle and fantasize about sexual conquest, to undress women with their eyes. In large part, women participate in this dynamic by playing the part of spectacle, by playing along with the beauty standards established by the system.

Woman often become what the men expect. They hand over their selfhood, to a large degree, and accept male definitions of desirability. There is an implicit power differential between observer and observed, one that is maximized by retailers and made “sexy.” Women pose and men pursue.

So it has come to seem to me at points during this trip when I find myself gawking at people. I am placing myself outside and above them. I am privileging my position as observer for the sake of my own pleasure.

In the end, I think I am more comfortable with ruins and landscapes. I can ask nothing of them. I have no power over them. I must accept them on their own terms. If anything, it is they who choose when to offer to me their beauty and meaning.

Reason 888 Why I Love Morocco

Reason 584 Why I Love Morocco

Reason 318 Why I Love Morocco